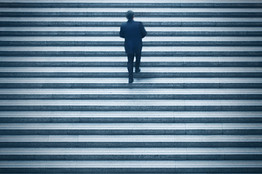 When Peggy and I lived in Washington, DC, we had dinner with a couple who worked with a ministry called “Fellowship House.” They ministered to powerful muckity mucks on Capitol Hill and sought to bring them the gospel in “non-threatening” ways. Half way through the meal they said, straight-faced I might add, that they had to have an expensive home with fine furniture, china and all the trappings because “the people we minister to just wouldn’t understand.” We thought that was one of the cleverest spiritual self-justifications we had ever heard. These folks felt that they needed to be “upwardly mobile,” to keep ahead, to do their job, to be taken seriously.

When we look at this primary season we’ve seen campaigning sinking to its lowest level certainly in my life time. Grown men are yelling at and insulting one another during a Presidential debate. There is bravado and boasting about how tough they are, how rich they are, how special they are—the next Savior of America. We’ve seen coarse, hateful, divisive rhetoric that appeals to the basest instincts of human beings. Humility is certainly not among their virtues. As Jesus said, “You shall know them by their fruit.”

In contrast, we have our Palm Sunday gospel before us. In this Gospel we see Jesus becoming “downwardly mobile” in order to redeem a broken and lost humanity. Let’s look at the scenario.  Palm Sunday began with a festive procession. Good Friday ended with the death penalty. Excited children waving palm branches gave way to violent mobs shouting death threats. Adoration by the crowds in Jerusalem evaporated into abandonment by God on Golgotha. 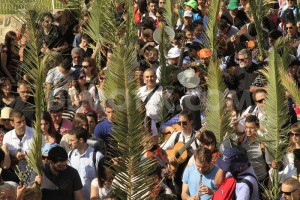 Between Palm Sunday and Good Friday, Jesus’ disciples argued among themselves about who was the greatest, Judas betrayed him and then committed suicide, Peter denied ever knowing him, and all his disciples fled for the high grass (except for the women). After three years of itinerant preaching, teaching, and healing that focused on the poor, the imprisoned, the blind, and all who were oppressed (Luke 4:18ff), Jesus’ family declared him insane, the religious establishment hated him, and the political authorities had had enough. And so Rome deployed all the brutal means at its disposal to crush an insurgent movement—rendition, interrogation, torture, mockery, humiliation, and then a sadistic execution designed as a “calculated social deterrent” (Borg) to any other trouble makers who might challenge imperial authority and disturb the Pax Romana.

But why did Jesus die? The passion narratives for this week explain why. Jesus was executed for three reasons, says Luke: “We found this fellow subverting the nation, opposing payment of taxes to Caesar, and saying that He Himself is Christ, a King” (Luke 23:1–2). In John’s gospel the angry mob warned Pilate, “If you let this man go, you are no friend of Caesar. Anyone who claims to be a king opposes Caesar” (John 19:12). In short, “He’s subverting our nation. He opposes Caesar. You can’t befriend both Jesus and Caesar.” They were right, even more right than they knew or could have imagined.

Jesus’ “triumphal entry” into the clogged streets of Jerusalem on Good Friday was a deeply ironic, highly symbolic, and deliberately provocative act. It was an enacted parable or street theater that dramatized his subversive mission and message. He didn’t ride a donkey because he was too tired to walk or because he wanted a good view of the crowds. The Oxford scholar George Caird characterized Jesus’ triumphal entry as more of a “planned political demonstration” than the religious celebration that we sentimentalize today. 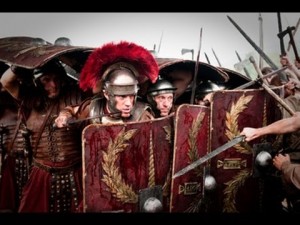 The Roman state always made a show of force during the Jewish Passover when pilgrims thronged to Jerusalem to celebrate their political liberation from Egypt centuries earlier. New Testament scholars Marcus Borg and John Dominic Crossan imagine not one but two political processions entering Jerusalem that Friday morning in the spring of AD 30. In a bold parody of imperial politics, king Jesus descended the Mount of Olives into Jerusalem from the east in fulfillment of Zechariah’s ancient prophecy: “Look, your king is coming to you, gentle and riding on a donkey, on a colt, the foal of a donkey” (Matthew 21:5 = Zechariah 9:9). From the west, the Roman governor Pilate entered Jerusalem with all the pomp of state power. Pilate’s brigades showcased Rome’s military might, power and glory. Jesus’ triumphal entry, by stark contrast, was an anti-imperial and anti-triumphal “counter-procession” of peasants that proclaimed an alternate and subversive community that for three years he had called “the kingdom of God.”

On Palm Sunday Jesus invites us to join his subversive counter-procession. But he calls us not to just any subversion, subversion for its own sake, or to some new and improved political agenda. Christian subversion takes as its model Jesus himself. It aims for what Martin Luther King Jr. called “transformed nonconformity” (cf. Romans 12:1–2). It is a subversion that is deeply spiritual and deeply social. He calls us to resist the false kingdoms of this world that are being promised by our bloviating Presidential candidates. He calls us to a different standard of living that is not “upwardly mobile,” but downwardly mobile.

Look at Jesus. In one of the earliest Christian hymns, believers worshipped Jesus as one who “being in very nature God, did not consider equality with God something to be grasped, but made himself nothing, taking the very nature of a servant, being made in human likeness. And being found in appearance as a man, he humbled himself and became obedient to death—even death on a cross.” It is staggering to think that the second person of the Trinity, the Divine Logos–the creative, ruling, principle of the universe, took up residence in Jesus of Nazareth. Yet he, “did not regard equality with God as something to be exploited,” but rather became a servant.

Servanthood is a description of Jesus’ whole career: He came to seek and to save that which was lost.  The sacrifice of Christ was the self-giving of his whole life, not just his death on the cross.  He gave up his prerogatives as God in the Bethlehem manger; he gave himself in teaching, healing, touching, and comforting in his Galilean ministry; he gave up his life at Calvary; and he gave us new life on Easter.  His whole career was one of service, of self-giving agape love. He became a bond-servant for the sake of humanity. 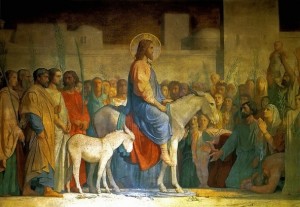 We tend to smuggle human definitions of power into what God must be like instead of taking our cues from Jesus.  We think of power as “controlling others” or “getting one’s own way.”  So when we define God as omnipotent, we project our human conceptions of power onto God and think of God as all-powerful.  God can do anything God wants to–instant and everywhere control.  And yet, when we look at the career of Jesus, we see those KINDS of definitions of power turned on their head.  Real power is the freedom to give up for the sake of another.  Real power is a love that will not let go. Real power is long-suffering.  Lowliness, humility, downward mobility are the characteristics that define our God.  Suffering love bids us to come follow, not brute force that demands compliance.  And so Paul instructs us in his epistle for this week: “have this attitude in yourselves which was also in Christ Jesus” (Philippians 2:5–11), something radically subversive.

And so although Palm Sunday marked the beginning of the end for Jesus, his end showed the way for our own beginning.

Norman Bendroth is a Professional Transition Specialist certified by the Interim Ministry Network. He has served as a settled pastor in two United Church of Christ congregations and as a Sr. Interim pastor in seven other UCC congregations. He was also an executive for three different non-profit agencies. He has had additional training in Mediation Skills for Church Leaders from the Lombard Mennonite Peace Center and training in Appreciative Inquiry from the Clergy Leadership Institute. Rev. Bendroth has the M.Div. from Trinity Evangelical Divinity School and his D. Min. from Andover Newton Theological school where he concentrated on theology and systems theory. He is married to Peggy Bendroth and has two adopted Amerasian children.
View all posts by Norman Bendroth →
This entry was posted in Uncategorized. Bookmark the permalink.