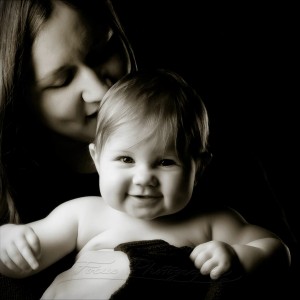 Episcopal priest, author and speaker Martin Smith tells a story about how he was at some out of the way chapel in England. He was startled by a simple limestone statue there of the Madonna and Child. He was startled because it was not the typical image we find by the old Masters of a new mother with peach colored skin doting over a celestial Jesus. So many of those are sentimental, maudlin and not very realistic about what Mary and Jesus would look like after a night of labor in a stable.

Instead, Mary was holding the baby out in front of her, looking down at the onlooker as if saying, “Would you like to hold the baby?” That happens a lot this time of year. Your daughter presents you with a new grandchild and says, “Would you like to hold her?” Or your nephew you haven’t seen since his wedding proudly asks if you would like to hold your new grandnephew. We are usually delighted to do so and coo and giggle and tickle the new addition to the family under the chin.

But for Mary to hand you Jesus! That would be a bit off-putting, to say the least. We might be afraid we’d drop him. Can you imagine dropping the Son of God? You wouldn’t want to get his dad mad. Perhaps we might think we’re unworthy? Who am I to hold Jesus? Mary thought the same thing when the angel Gabriel told her she would carry the Savior of the Nations in her womb. Who me? You’ve got to be kidding?

More likely it’s because we don’t want God getting that close. Imagine holding a baby who is God incarnate? A baby who might spit up on your shoulder or pee in your lap? What kind of god is that? Scandalous! That’s why Paul wrote: “22 For Jews demand signs and Greeks desire wisdom, 23 but we proclaim Christ crucified, a stumbling block to Jews and foolishness to Gentiles, 24 but to those who are the called, both Jews and Greeks, Christ the power of God and the wisdom of God. 25 For God’s foolishness is wiser than human wisdom, and God’s weakness is stronger than human strength.” (1 Corinthians 1:22-25)

The Greeks, who thought that flesh was corrupt, inferior to all things spiritual, and only a container for the soul scoffed at the idea that God would take on the flesh of a human being. And the Jews who thought that anyone who was “hanged on a tree,” (13 Christ redeemed us from the curse of the law by becoming a curse for us—for it is written, “Cursed is everyone who hangs on a tree.’” (Galatians 3:13; See Deut. 21: 23) was cursed by God. To think that God’s Messiah could be crucified was preposterous.

And yet this is what we have before us tonight. God who created all things became part of that creation. God who gave birth to time and space was subject to the limitations of time and space. God who gave birth to the hu¬man race became subject to the birth of Mary. The pre-existent, eternal, second person of the Trinity was born in a manger and restricted by swaddling clothes. The God who knew not the limitations of time was personally altered and fractured by time, and became a victim of time by submitting to the end of time in personal death. Foolishness indeed!

This is the profundity of what we celebrate tonight and which John puts so powerfully, “And the Word became flesh and lived among us, and we have seen his glory, the glory as of a father’s only son, full of grace and truth.” (John 1: 14).

Another reason that we wouldn’t want to hold the baby Jesus is that we would have to become just as vulnerable as he was. Couldn’t we just look? It is as if Mary were saying, “No, you take him. He’s not just my baby, but yours as well. Jesus is for all of us. He belongs to you as much as to me.” When God can be this close it’s frightening. God is not the distant potentate, the wholly other, or the Force of Star Wars that we imagined, but God is a close as hands and breath. Now God will find us out. God will know who I truly am. God will discover all my insecurities, lustful fantasies, puffed up ego, secret sins, deepest desires, heartaches and hopes—everything! Well, yah. That’s the point, isn’t it? Christ wants to be your Savior, your Holy Friend. As Henri Nouwen puts it, “God decided not to be God without you.”

We have an image of an all-powerful, overwhelming God, judgmental God, who scares Hades out of us. And God is fearful—unbearable light, weighty holiness, towering and majestic, beyond our knowing, righteous and pure. God is like a Blue-White star which at over 50,000 degrees Celsius would vaporize us if we stood before such intensive heat. So in Christ, God becomes a candle to draw near to us. The Creator of Heaven and earth came to us as a human baby, who is the Light of the World.

We cannot hold onto our dread of God and still hold baby Emmanuel in our arms. To be sure God does judge the evil of the world and in us, but it is a merciful judgment, not a punitive judgment. It is a judgment of all that is wrong in the world to make it right. As preacher Barbara Brown Taylor says, “God loves us just as we are, but God loves us too much to leave us that way.”

We are so sure that God’s closeness would be invasive, overwhelming and suffocating; so convinced that God is dangerous that we better keep our distance. All of that comes under judgment tonight. Mary says to us, “Here is the God you are so afraid of, the God you feel you cannot trust. If this God is so fearsome why would he come to you as a child? Will you take him into your arms?” To do so we have to let go of our fears, to trust in a love so amazing that it would stoop so low to embrace us by letting us embrace him.

So, this Christmas Eve, “Would you like to hold the baby?”