God in the Voting Booth

Posted on November 8, 2016 by Norman Bendroth 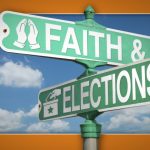 Come with me back to 1729. The pastor at Tewksbury Congregational Church likely preached an election day sermon as did our Puritan forebears.  They would speak about the call to national righteousness and the obligations of lawmakers to obey God’s law. Martin Luther exhorted pastors to “whisper the law of God into the magistrates ear.” The pastor would often endorse a candidate as Jeremiah Bellamy, pastor of First Parish in Dover, NH, did for George Washington. Bellamy was the chaplain to patriot soldiers and was a huge booster of the revolution.

I suspect if I did that today, or any of our pastors, we’d be job hunting. Yet God does have a sure word about our politics and our elections. As Christians we profess Jesus as Lord and that should include every area of our lives—including the personal, social, religious, economic, and political. But how can Christ be Lord of our politics? That is a question basic to the concerns of American Christians as we go to the polls on Tuesday.  The simple answer is that we submit our politics to the risen Lord by weighing every political issue in the light of scripture.

But that raises at least two tough problems.  First, the Hebrew Bible, or Old Testament, was written for a theocracy some 3,000 years ago and the New Tes­ta­ment was written for the church in a pluralistic society some 2,000 years ago.  So how can one apply biblical teaching to secular society in the 21st century?

Sec­ond, there is no detailed political or economic blueprint in the bi­ble regardless of what the religious right or the progressive left may tell you. The Bible won’t tell us if we should have an excise tax on snow tires or what kind of health care plan we should have. So how can a Christian determine which political views are more biblical?

Certainly the first application of both testaments is to the people of God.  But the scriptures clearly teach that God al­so cares about and judges nations.  The nations of this earth will not answer to you or to me, but to the risen Christ, the Lamb of God.  The lamb is the lamp of the city of God.  “The na­tions will walk by its light, and the kings of the earth will bring their splendor into it” (Rev. 21: 22-22:2).  The Old Testament ap­plied the same standards to surrounding nations, like Babylon, as it did for Israel.  God’s standards for justice are universal.

The second problem is also complex. There is no chapter and verse to tell us which candidate should be president.  There is no text that contains a blueprint for the in­ter­national economic order in the 2000s.  But that does not mean that Christians should derive their economic and political views entirely from secular theories.  There are prin­cip­les from scripture, Christian tradition and scholarship that have profound importance for our politics.

What then, are some of these principles?  I will sketch out five principles, and I mean sketch, each of which is worthy of a sermon, for your con­sideration.

The first principle is respect for human life.  Every person is created in the image of God (Gen. 1:27) and Christ died for all people (1 Tim. 2: 4, 6; 2 Pet. 3:9).  Therefore, ev­­ery person is im­measurably valuable and sacred. The value of each in­div­id­­ual is in­dependent of his or her social usefulness. Christian peo­ple cannot remain silent when modern society forgets the val­­ue of each individual–as when it neglects the mentally handicapped and aged, the immigrant, practices racial, religious or sexual discrimination, condones torture, or escalating abortion rates.

People of good will disagree about when an unborn child has moral and legal standing, for instance, but I think many will agree that reducing the number of abortions by providing quality sexuality education, supporting women with crisis pregnancies, encouraging adoption, and caring as intensely for life after birth as before birth is a step in the right direction.

Second, God has a special concern for the poor.  Scripture teach­es that God has a unique concern for the poor and the op­pressed.  If you were to take a pair of scissors and clip out ev­ery passage in the bible that speaks of God’s concern for the wid­ow, the orphan, the poor, the oppressed, the prisoner, the disenfranchised—by the end of that exercise, your bible would look like Swiss cheese. What was Jesus mission? As we read today:

“The Spirit of the Lord is upon me because he has anointed me to preach good news to the poor, to pro­claim release to the captives, the recovery of sight to the blind, to set at liberty those who are op­pres­sed, to proclaim the acceptable year of the Lord”  (Lk. 4: 16 ff).

Therefore God also commands the people of God to have a deep concern for the poor.  “Do not exploit the poor because they are poor and do not crush the needy in court” (Prov. 22:22).  Lead­ers must be sensitive to the poor and have a strong com­mit­ment to seek justice for them.  The Proverb promises, “If a king judges the poor with equity, his throne will be estab­lished for­ever” (29:14).

And this is not simply having food banks, shelters, and health clinics, but also addressing the structures that cause poverty and keep people in poverty. As Dom Helder Camera, Brazilian Roman Catholic Archbishop during the military regime there, put it: “When I give food to the poor, they call me a saint. When I ask why the poor have no food, they call me a communist.”

Third, God requires economic justice.  The starting point of Christian teaching on economics is that God is sovereign, God reigns.  God is the only absolute owner of all things. (Ps. 24: 1, Job 38; Lev. 25:23). God wants the earth’s resources to ben­e­fit everyone.

Throughout scripture, God commands and guides the peo­ple to carry out programs of economic sharing. Those who can­not work are to be cared for and those who can should have access to the resources to earn a decent living. (Lev. 25: 10-24; Deut. 14: 28-29; 15: 1-6).  The one who is sovereign over econ­om­ics requires economic patterns that offer all people the op­portunity to earn a living in fulfilling work.

In ancient Israel landowners were not to glean their fields at the edges or pick up wheat or corn or vegetables they dropped when harvesting. They were for the poor. Debts were forgiven every 25 years and land reverted back to the original family owners. Money was to be lent at no interest.

Fourth, God requires Christians to be peacemakers.  God’s will is shalom–right relationships with God, neighbor, and all cre­ation. It not only means peace as in the absence of conflict, but fully unpacked the word further means flourishing, abundance, and wholeness. God’s intention in Christ is “to reconcile to himself all things whether on earth or heaven” (Col. 1:20).  As followers of Christ, we must join in the task of building signs now of that com­ing shalom.  We must work to restore broken relation­ships, seeking repentance, forgiveness, and restitution to move for­ward toward wholeness in our communities, our nation, and our world. 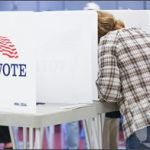 against nation neither shall they learn war any more” (Micah 4:3).  Many Christians believe they should, as the lesser of evils, engage in just wars for the sake of pre­ser­v­­ing some order in a fallen world.  Similar arguments are made on the personal level for “just abortion,” in a less than per­fect world.

Other Christians believe that war and the taking of human life under any circum-stances is contrary to the teach­ing of Christ and that he calls us to overcome our en­em­ies with suffering love rather than with weapons. Regardless, Jesus’ words, “Blessed are the peacemakers” are urgent in our time (Mt. 5:9).

Fifth, the Creator requires stewardship of creation.  “The earth is the Lord’s and the fullness within it,” the Psalmist says (24:1). In the creation story God places human beings in charge of this cre­a­tion, saying, “Let them have dominion over the fish of the sea and over the birds of the air and over the cattle and ov­er all the earth” (Gen. 1:26).  For generations we have justified polluting our land, water and sky in the name of having dominion over the earth. Because of our abuse of the environment the planet is heating up and the climate is changing. 97% of scientists when surveyed agree that global temperatures have increased during the past 100 years; 84% say they personally believe human-induced warming is occurring, and 74% agree that “currently available scientific evidence” substantiates its occurrence.

What in fact has happened is domination. In the past 50 years scripture scholars went scurrying back to their Bibles and said, “Wait a minute. We got it wrong.” The word for “dominion” is used elsewhere in the Hebrew Bible to refer to the role of a king.  And Israel’s view of king­ship is stri­kingly different from the domineering views of kingship in surrounding pagan societies.  According to OT scholar William Dryness, king­ship means that “Israel’s king is to rule as a brother over brothers and sisters.”

Do­minion, there­fore, is not domina­tion.  On the con­trary, humanity was given the respon­sibil­ity of upholding, pro­tecting, and pre­­serving the creation.  To be good stew­ards does not mean that we can manipulate property that is ours, but that we manage property that is God’s.  Such a high calling requires each generation to protect the environment and preserve the quality of life for future gen­erations. We are stewards of God’s good gift.

These are only five principles that I think can be culled from the scriptures and are vitally important today. I could have also added universal human rights, freedom of political and religious expression, personal integrity, and so on. Unfortunately, no candidate for public office will perfectly embody a commitment to any of these principles.   Human politics will at best be an approximation to God’s vision for society. As Christians, however, in this time of polarized politics, we should reject the false choices between personal re­sponsibility or social justice; between good values or good jobs; between strong families or strong neigh­borhoods; between sexual morality or civil rights for homosexuals; between the sanctity of unborn life or the rights of women; between fighting cultural corrosion or battling racial and economic injustice.  Life is more complex than bumper sticker slogans and we should present a “third way.”

Many of us care deeply about moral values and the breakdown of family life. We feel the erosion of personal responsibility and character in our neighborhoods and nation. But we also believe that social responsibility is at the heart of our faith, that racism and sexism are also sins, and that the best test of a nation’s righteousness is not its gross national product and military firepower but, according to the prophets, how it treats the poorest and most vulnerable.

How we apply these principles Tuesday will depend on our own experiences, 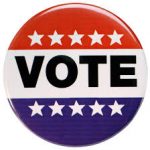 convictions, and social location. We will come out in different places. But by all means please remember to take God into the voting booth with you and that ultimately, God is still the governor of human affairs.