Christmas officially begins at midnight on December 25th. For Christians, the season of Christmastide extends from December 25th until January 6th, Epiphany. That’s where we get our twelve days of Christmas. You cannot live long in this culture without experiencing how quickly the air is let out of the holiday balloon come December 26th. The Magi may not make it to Bethlehem until January 6th, but in our culture the whole matter is dropped, gifts exchanged and returned, and decorations taken down barely before Christmas Day is over.

I like the way W.H. Auden describes this phenomenon in his poem  For the Time Being:

Well, so that is that. Now we must dismantle the tree…
Once again as in previous years we have seen the actual vision
and failed to do more than entertain it as an agreeable possibility.

Almost anybody can become sentimental about a baby cooing and drooling and entertaining angels and shepherds. But Christians and the Church know and remember that the baby grew up and got into trouble with the authorities for living out his notion of what the Kingdom of God looks like—a new social arrangement without the old barriers and boundaries, an arrangement in which all are loved and welcomed at the banquet. The Church also remembers a part of the story that the dominant culture has no interest in—that the shadow of a cross falls across the manger.

This birth is a sign, for people of faith, that God is alive and at work in the world. Christ comes again, is born again, when lives are transformed again by his love, when forgiven and restored men and women begin to live new lives in a world that is suddenly new because he was born into it. The culture may drop Christmas like a hot potato, but for people of faith, it is a beginning not an end. So there is Christmas work ahead of us. 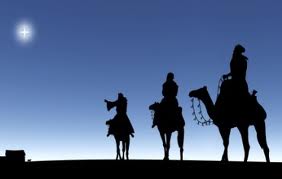 Music and sudden light
have interrupted our routine tonight
And swept the filth of habit from our hearts.
O here and now the endless journey starts.

Norman Bendroth is a Professional Transition Specialist certified by the Interim Ministry Network. He has served as a settled pastor in two United Church of Christ congregations and as a Sr. Interim pastor in seven other UCC congregations. He was also an executive for three different non-profit agencies. He has had additional training in Mediation Skills for Church Leaders from the Lombard Mennonite Peace Center and training in Appreciative Inquiry from the Clergy Leadership Institute. Rev. Bendroth has the M.Div. from Trinity Evangelical Divinity School and his D. Min. from Andover Newton Theological school where he concentrated on theology and systems theory. He is married to Peggy Bendroth and has two adopted Amerasian children.
View all posts by Norman Bendroth →
This entry was posted in Uncategorized. Bookmark the permalink.