The Faith of the Framers 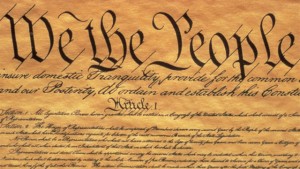 Many who were upset by the Supreme Court decision to legalize same-sex marriage and the court order to remove the monument bearing the Ten Commandments in Alabama asserted that the “Christian” origins of the United States are being assaulted and ignored by these decisions. As we approach the Fourth of July those claims beg reflection.

Most of our national Founders were men of sincere Protestant conviction. Their individual piety varied greatly. George Washington, for example, was an Episcopalian who attended worship regularly but never took communion or knelt when he prayed. Thomas Jefferson, who called himself a Christian, argued with much of the Bible and rejected the divinity of Christ. He even wrote his own version of the New Testament and expunged all references to miracles, including the resurrection of Christ. Benjamin Franklin, perhaps the least religious of the Founders, supported the Presbyterian Church all his life, but rarely attended and found their services dull. The “faith of our fathers,” however, was quite different than the kind practiced by evangelical Christians today.

These men were products of their time, just as we are. Church historian Mark Noll, (America’s God, Oxford) demonstrates that the faith many of the Founders embraced was known as Deism, which is less a religion than a way of perceiving God’s activity in the world. They were creatures rooted in the 17th-and 18th-century scientific and philosophical revolutions of the Enlightenment.  For Deists, God is not a benevolent father figure who is active in the world, but rather an undefined and unknowable “prime mover” who is revealed in immutable natural laws. Everything from Adam Smith’s “invisible hand” in economics to humanity’s desire for freedom to the movement of the planets are signs of God’s presence among us. For many, in keeping with a mechanistic view of the universe, God was like a giant watchmaker who wound up the universe, established laws to keep it going, and skipped town. The source of these laws was rarely called God, in the sense of a personal being, rather they addressed he or it as “Divine Providence” or “The Universal Sovereign.” 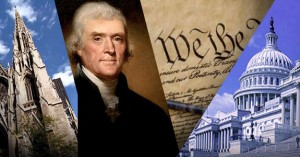 Nevertheless, the Founders considered religion to be essential to the health of the new republic. They felt religion imbued people with a sense of self-control, sacrifice, a moral compass and compassion that were necessary for good citizenship. These qualities put the brakes on the destructive tendencies of democracy and capitalism (when individual rights are exalted over the common good). “Of all the dispositions and habits which lead to political prosperity,” said George Washington in his 1796 farewell address, “religion and morality are indispensable supports.” James Madison echoed these sentiments when he wrote, “Before any man can be considered a member of Civil Society, he must be considered a subject of the Governour of the Universe.” When the Founders gathered in 1787, they were determined to set a different course, so as to not repeat the mistakes of history.

They did so by largely excluding God and religion from the national blueprint. The only reference to religion in the original Constitution is in Article VI, Section 3: “No religious Test shall ever be required as a Qualification of any Office or public Trust under the United States.” When they added the Bill of Rights, the Framers felt a stronger statement was needed and modeled it after Virginia’s Statute for Religious Freedom, drafted by Thomas Jefferson and adopted by the Virginia Legislature in 1786. I declared that “all men shall be free to profess, and by argument to maintain, their opinion in matters of religion.”  James Madison expanded it further for the Constitution when he wrote, “The civil rights of none shall be abridged on account of religious belief or worship, nor shall any national religion be established, nor shall the full and equal rights of conscience be in any manner, or pretense, infringed.” With some editing, Madison’s resolution became part of the First Amendment we know today.

For all practical purposes, the language of the Framers put the United States on a road toward religious pluralism at best and secularism at worst. The earliest expression of this came on June 7, 1797, when the Senate ratified the Treaty of Tripoli, which made peace with the Barbary Pirates of North Africa. In that document they declared that they had no quarrel with the faith of any “Mehomitan” (Muslim) nation. Further, the treaty stipulated (which was unanimously passed) that “the government of the United States is not in any sense founded on the Christian religion.”

Orthodox Christians at the time were outraged but the die was cast. In 1802, then President Thomas Jefferson gave the nation a phrase that is repeated still today in every argument on the topic. Baptist ministers from Connecticut had written him, complaining of persecution by the state’s Congregationalist establishment, and seeking his views on religion and the Constitution. “Religion is a matter which lies solely between man and his God,” Jefferson assured them, declaring that the First Amendment had “erected a wall of separation between Church and State.” 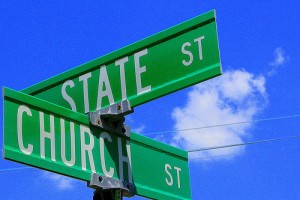 That principle has served us well for the past 229 years.

Alexis de Tocqueville observed that one reason religion flourished in America, as opposed to waning in Europe, was because it was voluntary. Voluntarism gave rise to a plethora of denominations and churches were supported by private contributions instead of the State resulting in deeper commitment. Further, freedom of religion does not mean freedom from religion. On the one hand, some Christian apologists maintain that this was and is a Christian nation (evidence to the contrary notwithstanding) and on the other are extreme secularists who argue that there should be absolutely no religious references in our public life. To deny the Christian origins of the United States is just as fallacious as it is to deny that there were many other philosophies and worldviews that shaped the Framers and our founding documents.

English Common Law, upon which our American system is based, for instance, was being practiced in England some 200 years before Christianity was introduced to the island. Even the Supreme Court in their decision regarding the inclusion of “one nation under God” in the pledge of allegiance said that our national references to God were but “ceremonial Deism,” not Biblical Christianity.

Harvard Professor of Religion, Diana Eck, argues that not only is the United States one of the most religious nations on the planet, but is also the most religiously diverse. Granted, the Judeo-Christian heritage is still the most dominant, but the reality is that we are a far more religiously plural nation than the Framers ever imagined. The challenge for Christians is to be distinctive by their lifestyle of love even as they are tolerant of people of other faiths or of no faith. It is the Church that is home for the people of God, not the State, and we shouldn’t expect the State to act like the Church. Nevertheless, people of faith have every right to influence public policy according to their religious convictions even as they must make room for others to do the same.

What a rich and varied nation we are blessed to live in! And what a privilege it is to exercise our faith in freedom as we celebrate our liberty, which is a gift of God.