One of the signs that Christmas is approaching that warms my heart like a heat and serve roll are the cheap vinyl inflatable decorations that adorn either side of our house. To our right is a lovely young family who live on the second floor. The husband announced to me that they wanted to get “festive” for the season–the day after Thanksgiving.

Soon Santa with his sleigh and reindeer were riding shotgun on the porch roof while the big, white, hairy yeti-like creature from Burl Ive’s Rudolph the Red Nosed Reindeer  (the 1964 stop animation classic where Burl sings, “Have a Holly Jolly Christmas.” Yes, that one.) guarded the front walk (which is lined with illuminated candy canes.). As if not enough, there is an inflatable locomotive with Santa and the elves hanging on for dear life.

Not to be outdone, our elderly neighbor lady to our left has a Ferris-wheel with Santa, elves, monkeys, armadillos, anything that can fit in, circling outside our sun room. The piece de resistance is a giant snow globe that encloses a skating scene and has synthetic snow blowing around inside. This, of course, was not her doing. Her son and grandchildren thought it would be a lovely way to cheer G’ma up during Christmas.

In this setting we f 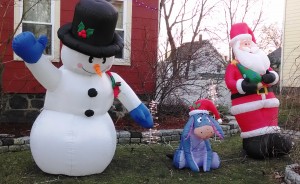 eel like the couple who showed up at an inaugural ball in our skivvies. For us, we have a wreath on the door, a large one over our front windows, some evergreen garlands tastefully hung, with a spot light on the door and on the wreath on the house.  Understated and elegant. Little did we know we were under-dressed.

My poor dog had a cardiac arrest the first Christmas we walked around the neighborhood after dark. We encountered Santa on a Harley, giant Nutcrackers, snowmen so big they had their own zip code, and, of course, the gratuitous and occasional crèche scene. She eventually became used to them and marked them appropriately for future rounds.

I’ve often wondered if Martians landed in suburbia this time of year they must think we all belong to First Church of Meteorology. We dream of white Christmases while Jack Frost nips at our nose, asking that the winter gods let it snow. We build idols out of snow called Frosty and our children sing, “No school tomorrow ’cause of snow” at their holiday concerts. It usually starts after Halloween.

At this time of year I feel we live in a parallel universe. Don’t get me wrong, I love to decorate, but I always wait until the first Sunday in Advent to put up the window candles. Week two witnesses the outdoor lights and garlands going up. The mantle, front hallway, and dining room buffet are decked out with miniature villages, nutcrackers out the wazoo, and, of course, the crèche. Week three is when the tree arrives. Week four we just admire it all.

But Advent is the season of “thin spaces,” as Celtic Christians put it–at this time of the year the gap between heaven and earth is paper thin. God’s time (kairos) and our time (chronos) run on parallel and overlapping tracks. Our calendars are about five weeks apart, always out of synch. Yet through the warp and woof of our interminable days, the bright thread of God’s hidden, but unmistakable presence weaves the whole lot together.

During Advent we wait and hope. During Christmas we celebrate that we are the visited planet. During Epiphany we are astonished that God jumps in the creek with us and invites seekers everywhere to join the fun. It’s only then that I take down my lights and wait ’til next year.