Posted on February 7, 2016 by Norman Bendroth 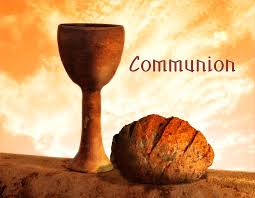 This morning, on this communion Sunday, I want to give you six guidelines for making use of this Great Supper that Christ has given us; six prepositions, six great looks that come to us from 1 Corinthians 11. These may be new looks for you, or helpful reminders. You may even wish to jot them down to review every time you come to the Lord’s Table.

First, look back. V. 23: “For I received from the Lord what I also passed on to you: the Lord Jesus, on the night he was betrayed, took bread, and when he had given thanks, he broke it and said, ‘This is my body, which is for you; do this in remembrance of me.” Look back. Look back to Passover night. Holy Communion is seen as a Christian Passover in 1 Cor. 5:7: “Christ, our Passover lamb, has been sacrificed. Therefore let us keep the festival…” It was on Passover night that this great meal was instituted. It was the night of nights when they celebrated the great release of the people from Egypt. Remember how God told the Israelites to sacrifice a lamb and to smear its blood on the door casings of their homes (Ex. 12:13). The Lord passed over those homes that were under the blood of the lamb; the lamb died instead of the first born. 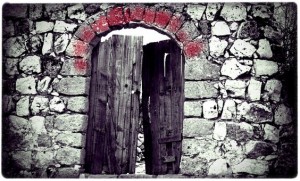 Now Christ is saying that the Passover they celebrated on this night was in anticipation of God’s greatest act of deliverance. Jesus as both the first-born of God and as the Lamb of God, would offer the ultimate sacrifice—the gift of himself. Imagine the electric sense when Jesus took bread and said to his disciples, “This is my body, which is for you.”

Imagine their amazement when Jesus said, “This cup of thanksgiving is the new covenant made, not with the blood of goats and bulls, but in my blood.” An important thing to remember is that Jesus was not a blood offering to appease an angry God. That is paganism. God did not require blood nor punish Jesus instead of us. That would be Divine child abuse. No, remember what Paul said to the Corinthians, “God was in Christ, reconciling the world to himself, no longer counting people’s sins against them. And he gave us this wonderful message of reconciliation.” (2 Cor. 5:19) God was on the cross taking all the pain, suffering, sin and sorrow into and upon the Divine heart to identify with us and to overcome all that plagues us. Jesus became the scapegoat that carried the sins of the world away. Jesus’ offered to God what we could not offer—a life of holiness and faithfulness to God.

God now would “pass over” the sins of those who trusted in this great work of Christ. This was the gateway to a greater deliverance than Egypt. It was deliverance from the bondage of sin, death, and evil. Christ drained the power and the penalty of sin, of separation from God, with his own body. This new Passover is a memorial of his great achievement on Calvary. We need to look back with profound gratitude that God in Christ did this for me! 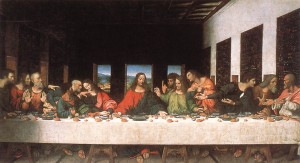 Second, we are to look in. V.27: “Therefore, whoever eats the bread or drinks the cup of the Lord in an unworthy manner will be guilty of sinning against the body and blood of the Lord. A person ought to examine him or herself be¬fore they eat of the bread and drink of the cup.” We are to look in, examine ourselves, and repent. In the Jewish Passover, they have a great hunt throughout their homes for leaven, the yeast, which generally has a bad connotation, a symbol of evil, in the Old Testament. It spreads. You put in a little lump of yeast into bread and the whole thing rises. “A little works through the whole batch of dough,” says Paul, “so get rid of the old yeast…of malice and wickedness.”

You cannot go to a royal banquet with filthy hands. If we want to profit from the Lord’s Supper there has got to be that looking in and taking an inventory of our soul. We needn’t get into an excoriating excavation, but we need to say, “Cleanse me, O Lord, and try my heart and see if there be any wicked way in me.”

Then, look up. Look up in faith and adoration. V.20: “When you come together, it is not the Lord’s Supper you eat, for as you eat, each of you goes ahead without waiting for anybody else. One remains hungry, another gets drunk.” What would happen is that the Corinthians would meet and worship in one another’s homes. An agape or love feast preceded often communion. The well off would arrive early and gorge themselves and get drunk. Working people and slaves who would arrive after work would find most of the food gone by the time they got there. So Paul is being very sarcastic, saying, “It’s not the Lord’s supper you eat when you get together. You’re just getting together to pig-out.”
It is not the supper about the Lord; it is the supper with the Lord. And if you are having supper with the Lord, you can’t act like selfish pigs. I believe in the real presence of Christ in the Eucharist. The Lord is here. The Lord is at hand. The Lord is alive and in our midst. The Lord is really present. It is the Lord’s Supper. He is the host. He welcomes us to eat with him and to feed on him. 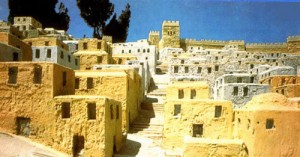 Then, look around, in love and fellowship. When we come together as a people we are expressing a unity that is found in this sacrament. And so if there is division and disharmony and inequity, as there was in Corinth, remember, “Anyone who eats and drinks without recognizing the body of the Lord eats and drinks judgment on himself” (v.29). This could mean that anyone who approaches communion without recognizing the significance of Christ’s broken body on the cross does so to his or her detriment. But it also can mean anyone who comes to the Lord’s Table while hurting the body of Christ, the Church, trivializes the meal. 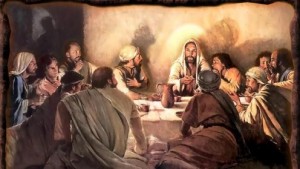 Excluding people from the meal can hurt the body of Christ. That is why we invite children to communion, claimed by God at their baptism. Remember that communion is a social meal. It is not a private thing. It is not my communion. It is a shared thing. It was at a table with the twelve. It is a mark of the self-giving of Jesus which is meant to be a model of the self-giving of us to one another. We are his body here on earth. We therefore need to fulfill that new commandment to love one another. We need one another. There is one loaf. There is one cup. There is one host who invites us. We are guests and we are there by his invitation alone. We have no right to despise anybody else. We have no right to be at loggerheads with one another. We are denying the very sacrament of which we partake when we do so. And if we feel unworthy, that is the prime qualification for partaking.

Next, look forward. Look forward in confidence. V.26: “For whenever you eat this bread and drink this cup, you proclaim the Lord’s death until he comes.” Look forward in confidence. You are engaged in a foretaste of heaven right now. It is the marriage supper of the lamb that you are celebrating in advance. In the midst of social disintegration or political danger, in the face of agony and turmoil in your own life, we are saying, “Our God reigns.” In Christ’s cross and resurrection, and in the meal given to us to celebrate it, we have the chance to announce it until God’s rule is established. I see in communion the first installment of God’s future and I say, “Alleluia, this is the marriage supper of the Lamb in cameo, in miniature. Our God reigns. This is the feast of victory of our God.” That’s what you’re celebrating in the Lord’s Supper: a look forward. 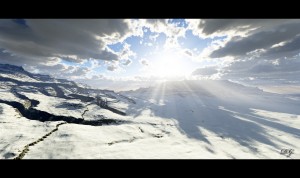 Lastly, look out. Look out in service. V.26: “You proclaim or announce the Lord’s death ‘til he comes” is indeed the case. You proclaim it by the broken bread and the poured out wine. But you also go out to announce it. The feast proclaims the Lord’s death to the world and pro¬claims to God that we rely on nothing else. These are power bars for Christian servants and activists, not junk food for Christian couch potatoes. You and I are called to be Christ’s broken body for needy people in the week that follows. “For you,” that’s the haunting cry of Jesus as he offers himself. “My body, for you.” “For you!” That’s the attitude we need to adopt as we leave this place. Fed, nourished, grateful, uplifted. It is a life of service for the Lord who has given himself for us.

So every time you come to this table look back, look in, look up, look around, look forward, and look out.