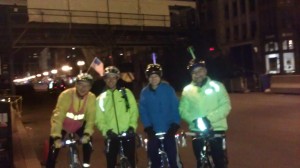 In the aftermath of the horror of Marathon Monday week, one “good news” sidebar that has been lost is Midnight Marathon. On the Sunday before the marathon eight hundred plus certifiable “nut jobs” gathered in the center of Hopkinton to ride the 26.2 mile route into Copley Square. It’s a tradition that started in 2009.

It was Vanity Fair as riders of all sizes, shapes and ages gathered. A train from South Station booked just for this event brought scores to Ashland. Three coach buses pulled up with a U-Haul trailer behind toting their bikes delivering several hundred more. Others either biked or were dropped off.

Some riders were decked out in high end, state-of-the-art bikes and bike gear. Others rode their 3-speed Schwinn from when they were a kid in blue jeans and a sweatshirt. Another wore “hoody-footy” pajamas with Holstein spots all over him. One had a homemade drum made out of a plastic bucket below his handlebars drumming along with cadence of the cranks as we rode. Several had speakers mounted on either side of their back wheels serenading or annoying us along the trail. Most of us rode the road bikes and gear we use as weekend warriors.

At midnight we all headed out under a crescent moon and a clear sky. The temperature had dropped from the mid-fifties to the high thirties. The downhill wind bit at my fingers, toes and nose, but I didn’t notice for long. It was an amazing sight to see the red tail lights of hundreds of bicycles wending their way down Rt. 135 as far as the eye could see. Just as they would for the runners tomorrow (though not quite as many were up at 1 am), people lined the route cheering us on, “woo-hooing,” and toasting us as we drove. Even the birds were noticeably chirpy.

We pedaled through Ashland, Natick, Framingham and Wellesley–either lit by the ambient moonlight or the headlamps of our bikes. The shroud of darkness and the stillness of the night made these places strangely unfamiliar. It was a rush to ride by BC, around the Chestnut Hill reservoir, into Brookline and down the middle of Beacon, Commonwealth and Boylston Streets with only the sound of rubber meeting road and people breathing deeply.

People started arriving in Copley at 1:30 am (the elite bikers). I showed up at 2:05:08 (Five minutes faster than the best times on Monday–yikes!). We cheered and high-fived and congratulated one another. Folks shared power bars and took photos of triumphant bikers holding their bikes over their heads. Entrepreneurial college students handed out cookies advertising a cookie delivery business they had started for late night sweet tooth cravings.  A guy in a kilt took a picture of me and my three friends. We photographed a gang of ten Asian students. My friend Lisa and I waited in front of the Copley Sq. T entrance taking advantage of the warm air pouring out. We waited for our other two riding friends who showed up at 3:45; it took three tubes and six patches to get them back.

When they arrived, a young woman decked out in running gear with quads of steel asked us what was going on. We told her and she immediately declared, “I’m going to do this next year.” After she took our picture we asked her what she was doing there. “Oh, I’m waiting for a friend. We’re going to run out to Hopkinton and then run in the marathon.” And we thought we were tired.

Twelve hours later in that same spot a blast went off. Yes, it was freaky. And, yes, it sucked the life out of an event that was so full of goofiness and spontaneity. But, you know what? Just like the marathoners, we’ll be back in spades next year.